Please, stand by our side! 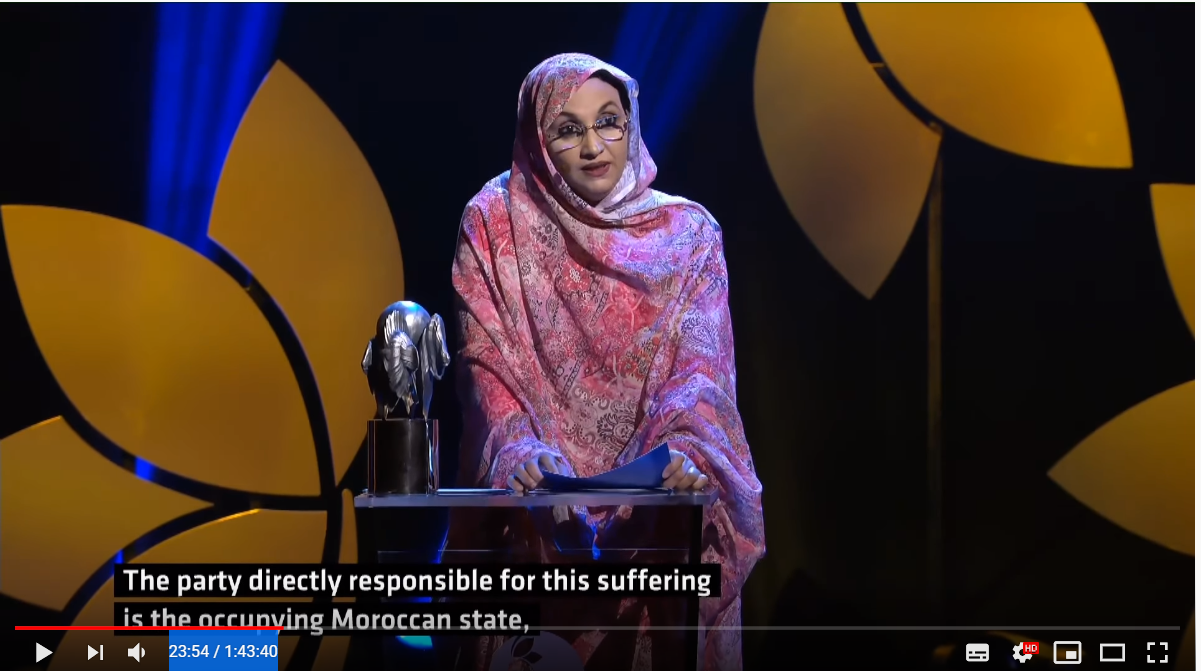 My name is Aminatou Haidar, I am a human rights defender from Western Sahara, the last colony in Africa.

I would like, first of all, to thank the International Jury of the Right Livelihood Award, for the honour they have bestowed on me, which is indeed an acknowledgement of my people’s struggle for freedom and independence, but also a tribute to human dignity and the principles and values ​​of human and peoples’ rights.

Allow me also to congratulate the other three Laureates who are sharing this Award with me, and I would like to tell them that their struggles are ours and that our struggles are complementary and aim for a more just humanity, and for more respect for human rights, for nature and for the great homeland that shelters us all, Mother Earth. Thank you, Greta Thunberg, for reminding us, the old generations, of our multiple responsibilities towards the younger and future generations, who will, unfortunately, inherit disasters and an inevitable fate because of our neglect. Thank you so much.

My experience resembles that of many of my compatriots: full of injustice, human rights violations, humiliation, enforced disappearance, torture and deprivation, but also full of resistance, sacrifice, refusal to submit and determination to defend human and people’s rights.

The party directly responsible for this suffering is the occupying Moroccan state, which persists in refusing to recognize our rights as Sahrawi people. But other European countries are also responsible for our suffering, such as Spain, which has failed its responsibilities toward us as its former colony; France, which protects and supports Morocco within the Security Council; and of course, the United Nations, which has so far failed to implement its resolutions regarding our right to self-determination and independence and has become the protector of the status quo, sustaining the occupation in a way. And, of course, the European Union also bears some of this responsibility, because of its continued plundering of our natural resources in complicity with Morocco, in total violation of all laws, including the decisions of the European Court of Justice.

In Western Sahara, we want the primacy of human dignity, while THEY want to turn that dignity into slavery, oppression and wars. And they are pushing us to give up our peaceful struggle because they have left us no other way out, and this is what I fear the most: That the Sahrawi people find themselves forced to take up arms again to defend their rights because of the indifference of the international community to these rights.

Therefore, the world that we want as Sahrawi people, as peaceful defenders of human and peoples’ rights, is a world where we can enjoy our right to a decent future for upcoming generations, and it is very different from the world of tyranny and supremacy through the use of armies and bombs, the world of massive destruction of life, and of violation of human principles and values that they want to impose on us. By “they” I mean the enemies of the peoples, the enemies of human rights and the enemies of democracy wherever they are.

Finally, I call on you to come to our help, please. Please stand by our side and save us from the  oppression of the Moroccan occupation. Please save peaceful and innocent women and children, and I call on you also to join the humanitarian struggle aimed at liberating dozens of Sahrawi political prisoners serving heavy and unfair sentences.

I thank you, ladies and gentlemen, once again for your support for my struggle and that of my award-winning comrades, because your support brings us even closer to achieving our goals and also brings us all closer to the ultimate goal we all seek: to achieve a world of peace, harmony and mutual respect. A world that respects nature as it respects man and all living things.